Here I sit in my treatment room waiting for my next and only patient of the day. It’s 4pm local time in Hilo, Hawaii and our first port day after a five days at sea traveling from Vancouver, Canada. 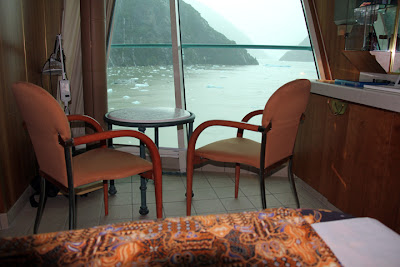 The view from "my office" as we travel near a glacier
The voyage was nice but uneventful for the most part. As those of you already on ships know it’s the sea day that are the long days and in turn where the revenue is made. 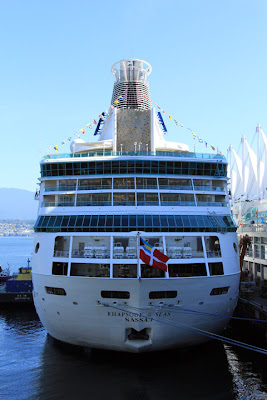 My treatment room is the top left corner of dark windows.
This shot was at the dock in Vancouver, Canada before we leaft for Hawaii 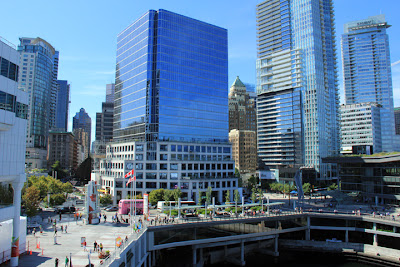 Here is a shot of Vancouver from my office
On this cruise that was the case for the first three days though I was busy on my fourth as well finishing packages that patients had previously booked. Usually my seminars have between 12-20 people but the last two have had a total of one person, which did end up booking an appointment. I also had a walk-in consultation that ended up a package of three and that is who I am waiting for this evening and then she will finish her package tomorrow.
The rest of the cruise is island hopping the Hawaiian Islands. I am not expecting any treatments if at all as the ship is basically deserted for this next week. Still I am near $8000 for this week.
I did have a few hours off today to visit Hilo. There is not really much you can do with only a few hours off between “drill” this morning and work this afternoon. That will change somewhat tomorrow as there is no drill and I do not have to be back onboard until 3:30pm to get ready for my one lone patient yet again.
After that it changes as I have two full days off in Maui where we have an overnight stay. Next is Kauai and then Honolulu, Oahu before heading to French Polynesia.

Now lets catch up with pictures on how I got to where I know find myself... 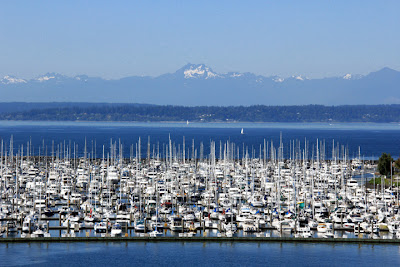 From our mooirng in Seattle before heading to Alaska 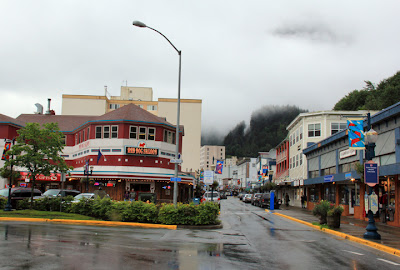 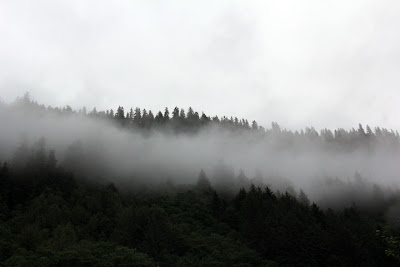 The view from Juneau 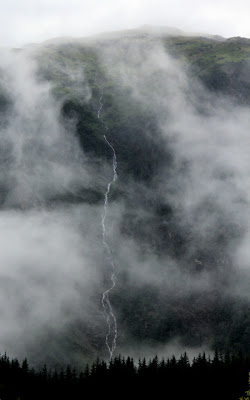 Another shot of outside Juneau 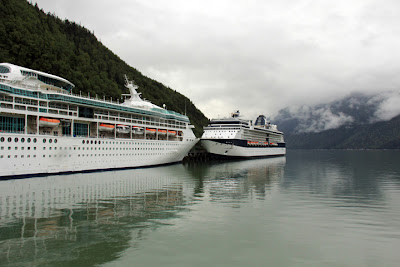 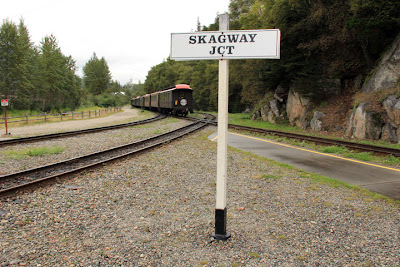 Just at the edge of Skagway 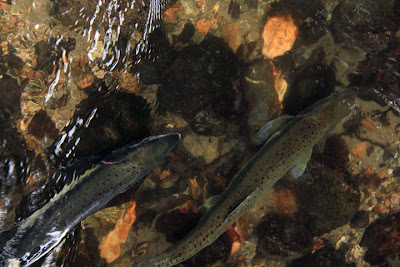 The creek running through town was loaded with salmon....100's of them 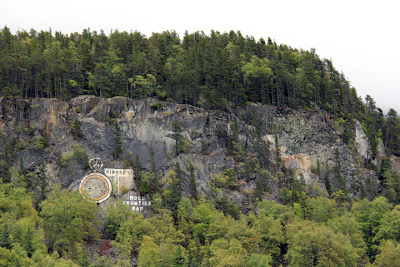 A billboard Skagway style...
yes graffiti even here in Alaska 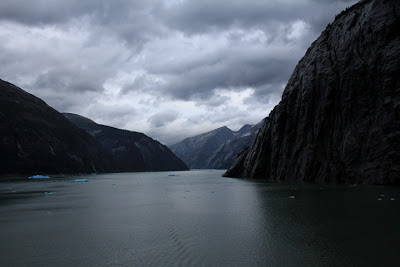 On the way to a glacier in the Tracy Arm Fjord 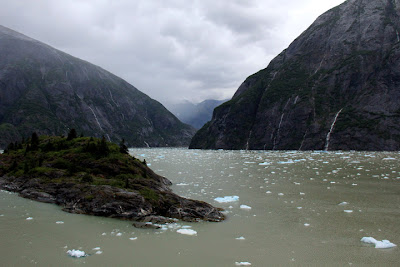 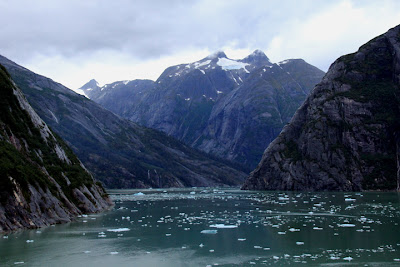 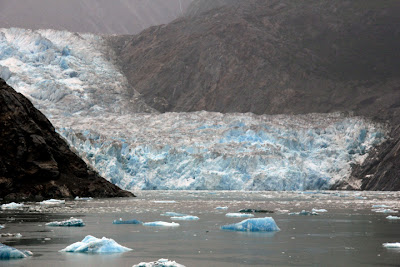 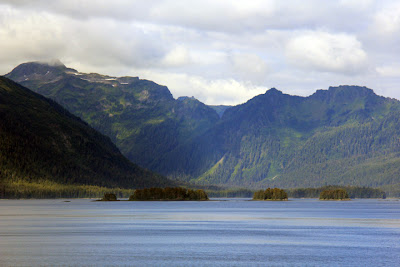 Headed back to either Seattle or Vancouver
along the Inside Passage 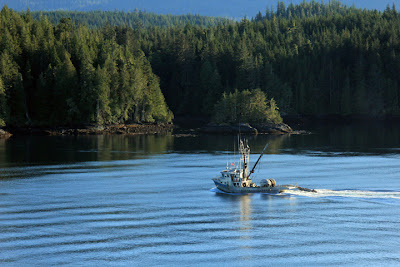 Along the Inside Passage 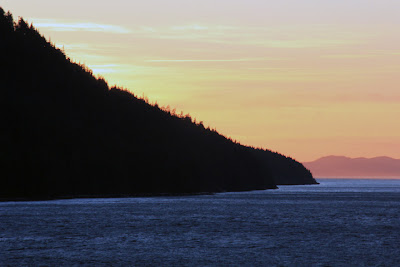 Sunset in the Inside Passage 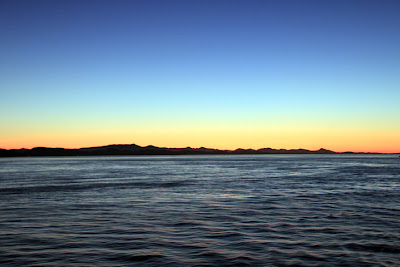 Leaving Vancouver for Hawaii!!!
WORK HARD
First let me mention a little of what I have discovered about working with patients and improving the numbers of packages sold and my retail. I think on my first contract of four months in retrospect I held back somewhat. Since then I have more have become more direct in some ways. Rather then talk to them about coming in for a treatment and then deciding how many treatments you would like or how many bottles of herbs they should buy I firmly state that “you need 3-5 treatments and 2 bottles of herbs and one instant refreshing gel.”
When Stephanie first approached me with this method of treatment procedures during training and again by Lisa during a fleet visit I just thought it’s not my style. I’m not about pushing treatments or retail on anyone and I’ll suggest what I feel they need.
That has not changed but what has changed is my confidence in the products Steiner offers. I have not only used but have had enough feedback from crew members and by patients that I now know the quality and the results possible if the patients follow through and do what I suggest.
Here is an example. Last week I had a patient come in for low back, upper back and hip pain. I told him that for best results he needed 3-5 treatments, as this worked on the root cause of the problem not just the related symptom and he agreed to 3 treatments. After the first treatment using the below points he felt 40% better.
I typically use a lot of needles for this treatment but I am also doing three separate treatments at once. I have found for years these points to be very successful. For upper back/neck – SI 11, SI 13, SI 14, Bl 11, GB 21 and occasionally GB 20 depending on the amount of pain in the cervical spine. For low back/hip I use Bl 23, Bl 25, Bl 32, Bl 33, Bl 34, Bl 53, Bl 54, Bl 40 and GB 34. At times I will also use GB 30 if more hip is involved or GB 36 and GB 37 if the pain extends down the back of the leg. I may also use Bl 18 for the livers side function of nourishing tendons and Bl 20 for the spleens side function of nourishing the muscles plus these point are on the erector spinea and pairs well with Bl 23 and Bl 25.
I then stated that he should get one tube of instant refreshing gel and 2 bottles of herbs that he bought. I explained this by stating the homeopathic arnica is quick acting and the herbal formulas are long lasting. I use this rational on every patient. If they are unable to use herbs due to meds I then say they need supersoak and musclease for the long lasting results as they also treat the root cause.
The next day the patient returned for his second treatment. After the treatment he now stated that he was 60% better. He then express that he came on the cruise to get healthy again. I then suggested if he wanted quicker results he should get the supersoak and musclease as well as they soak right into the skin at the exact location of the problem. Again he took my advice.
The next day when he came in for his third treatment he told me he felt so good after the treatment the previous day that he and his wife went dancing until 2am. He also stated that he woke an hour later and his legs really hurt and he was in a fair amount of pain. He then applied the essential oils and the instant refreshing gel and woke the next morning and felt 85% better. He was so impressed with the results of the treatments and products he booked two additional treatments.
After his fifth treatment he said he felt so good and had no pain for the first time that he could remember. He then asked even though he felt better if there was anything I could do for his energy levels and he booked two more treatments for a total of seven in all.
I changed the point prescription to raise the body’s qi and after the last two treatments he stated along with no pain he now has more energy then he ever has. I also sold him musclease synergy to follow up at home along with his other products.
Now I admit this is the exception but it goes to show that if they follow your advice they and you can achieve amazing result. But I will say that if you are firm, talk to the patient with confidence and in a professional manner as a physician they will take your advice and the numbers of packages you sell and your retail will increase also.
There is really no reason why the majority of the patients should not receive a package of 3 treatments, a bottle of instant refreshing gel and 2 bottles of herbs or a bottle of instant refreshing gel, supersoak and musclease. This is my goal per patient. Does it happen with every patient, no, but it does happen with the vast majority.
Using this method I have had my best numbers yet for 7 day cruises, two near $8,000 with retail averaging around $3000 and one at $11,103 with $4500 in retail since my contract started a month ago. I did have one low week of $4100 from a charter jazz cruise where nobody showed for seminars and the entire spa was very slow as there were many events and concerts for them to go to…they just were not spa people. Still over $31,000 in revenue for my first month back is not bad.

PLAY HARD
Day 1 – Hilo Hawaii
As soon as I stepped outside I was sent back to 1976, which was the first time I was in Hawaii. It was the smell, I remember that smell. The South Pacific has a distinct smell. It’s the fresh air, the humidity, the type of rain and the heat combined that makes it unique.
As it was raining and I had to be back at work a few hours later it was just lunch and catching up on the internet. So much for Hilo.
Day 2 – Kona
We are tendered in Kona so we were not able to get off the ship until 11am.
I headed to a beach a few miles south of the town with friends. Once there here myself and a couple ended up at the resort next to the beach and had a great lunch in an outside style bar/restaurant. After that it was sitting in the pool enjoying the afternoon, sunny skies and a couple beers.
I did decide to venture out for a few pictures of the palm trees. I was about to walk through some bushes when I stopped just in time. They were loaded with huge spiders. They were everywhere and only a foot apart. I would have been covered with them. Sure glad something stopped me. 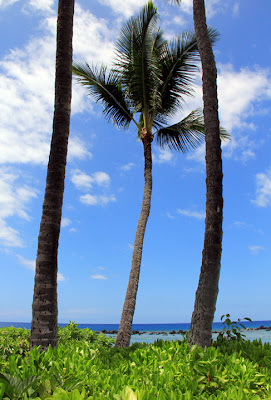 At the resort/beach in Kona 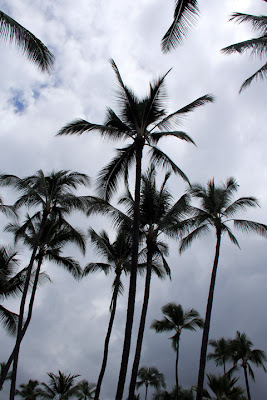 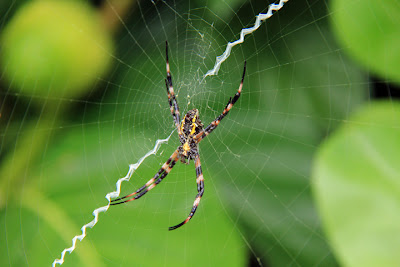 A the Kona spider
Day 3 and 4 – Maui
Tonight is the first time I do not have to be back at work. I left with James (trainer), Irish (bartender), Hadder (bartender) for a $20 taxi ride, which seems to be the norm everywhere we go, to a beach to relax. We are also in town overnight and plan on going to one of the clubs later tonight when Irish gets off work.
We ended up at the Maui Westin Resort and relaxed on the grounds and on their beach. We also enjoyed a couple beers at the resorts bar as well and just said we’d rather pay cash then put it on our room. 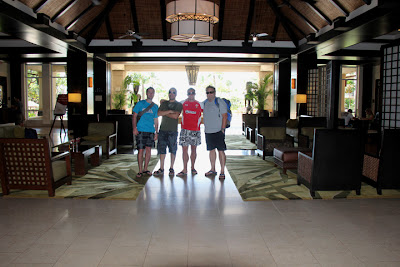 With the boys crashing the Maui Westin
Irish, Hadder, James and myself
After the Westin we headed back to town to find a place for the internet and lunch. This too seems to be the norm as none of us are really up for playing tourist at all the high priced shops and bars.
I ended up with the spa staff at Bubba Gumps for a bite to eat and then to Moose McGillicuddy’s for a few beers before heading back to the ship around 2am. It was very strange being off the ship at night.
It is now our second day in port in Maui and I plan on playing tourist, looking for the odd tidbit here and there for a couple people that are special to me and posting this blog and pics.
Sorry it has been so long between posts and keep your emails and questions coming and I’ll do my best to answer them from my experiences. But know I still have a great deal to learn myself about this life but so far so good.
Posted by AcuDocTCM at 3:58 PM