Who da thunk it….certainly not me but there I was fishing the Great Barrier Reef!

On our previous trip to Cairns James and I booked a fishing trip to the Great Barrier Reef. There are many boats that do this and fish the estuary but the last thing I wanted to do was fish a “party” boat with people that did not know how to fish.
As many of my friends know I’ve been fishing the vast majority of my life, it is a passion with me. I’ve fished rivers for trout, lakes for trout, bass and pike and the ocean for marlin, dorado (mahi mahi), tuna, roosterfish, yellowtail, sierra, bass, halibut and whatever happens to bite. Most of my fishing in the ocean has been off the coast of Southern California and Catalina Island. I’ve also had one fishing trip to Costa Rica and I’ve fished for 20 plus years in the Sea of Cortez both from the Baja side and mainland Mexico. As I said it is my passion.
And now I find myself fishing the Great Barrier Reef off Cairns, Australia. The boat and guide James and I hired was exactly what I was hoping for, an experienced guide and a 20-foot center console Southland, which is very similar to a Boston Whaler. 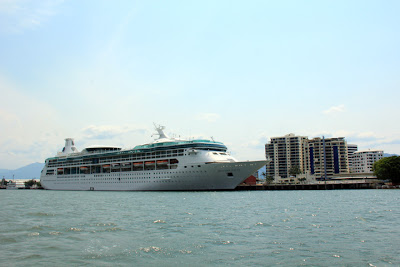 The Rhapsody of the Seas...
My house is Cairns, Australia
It took about 45 minutes to reach the fishing grounds. James had never fished before and it was my hopes that he would tie into something of descent size. At our first stop it would use an “iron” and jig in approximately 90 feet of water. It did not take long for James to get the hang of things.
As luck would have it I was hit first. It happened just as I felt the bottom and lifted my jig. I knew it was a fish immediately and could feel the head shake from side to side.
I called out to James this one is yours. It took a few minutes or so for James to get rigged with a fighting belt and during the time the fish took two or three very nice runs and the line screamed off the reel. As soon as he was ready I handed the rod to James. 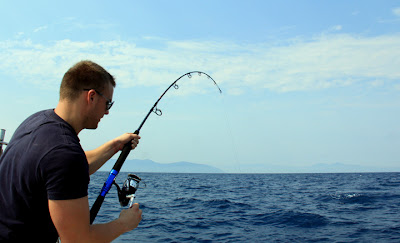 Fish On...
James fought the fish for a good ten minutes and brought a nice sized Blue Trevally onto the boat. It weighted about 17 pounds and the guide said it was the second or third biggest Blue he had ever brought on board. It was a really great fish to be James first and it put up a good fight even making a few more runs for James. 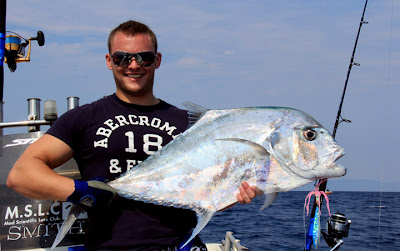 17 pound Blue Trevally...
James first fish ever
I think now James has a better idea how hard it can be to land a “good” fish. The one he fought was nice size but there are, as the saying goes “much bigger fish in the ocean”. James also confided that it was harder then he had expected which is the case for most people. Many think you just reel a fish in and bring on the boat.
Those of us who are hardcore fisherman, and fisherwomen know this not to be the case. My largest fish was a 200 pound stripe marlin off of San Carlos, Mexico. My longest/hardest fight was a 70 pound yellowfin tuna that took me over an hour to land on 30 pound test line. Fishing is a skill and hard work. It is also known as hours of boredom broken up with minutes of chaos.
A little later in the day I was hit another time with a Bludger Trevally while jigging and a Gold Spot Trevally on the troll, which I also handed off to James. They were nice fish but neither was near the size of the Blue Trevally we landed earlier. I also miss a strike from what seemed to be a very large Coral Trout or what we call a Grouper. That came while popping a lure in shallow water over the tops of reef structures.
After a bit more fishing it was time for lunch. So it was sandwiches and what is better to drink then an ice-cold Mexican beer when in very hot weather on the water. As we drifted around the reef during our lunch the reefs beauty and the clarity of the water amazed us. There is an old saying of something being “gin clear”. This is absolutely the case for the waters surrounding the Great Barrier Reef. 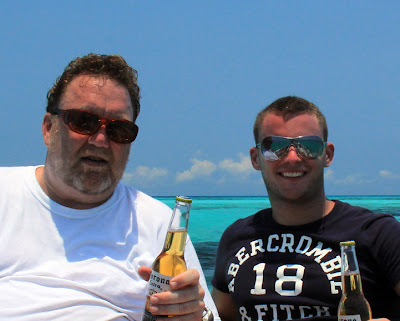 Coronas on the Great Barrier Reef 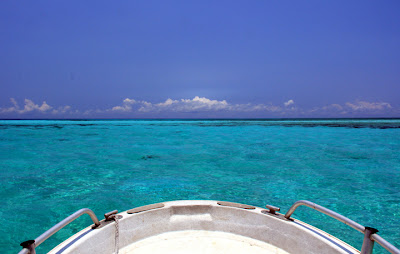 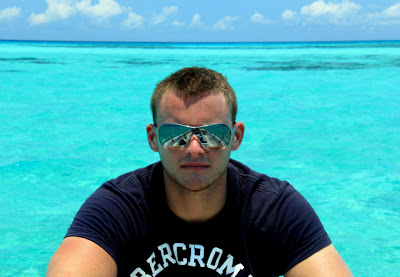 James doing what he does best...nothing...
After the day of fishing was complete it was another 45 minute run back to the boat. Luckily the seas were relatively flat though there were some nice bumps along the way and to definitely had to hold on. When we returned to the bay our guide Brendan took us through a side channel right across from the ship. His reason for doing so was another thing James and I were hoping to encounter and we were not disappointed. Within minutes we spotted a 10-foot saltwater crocodile sunning himself on the bank. This is the reason why nobody in Cairns and Airlie Beach swim in the water…there are things that will eat you! 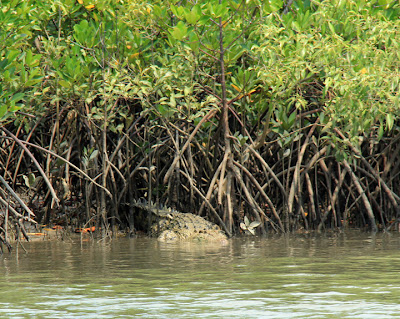 10 foot saltwater crocodile
So that was my day on the water and yet another thing that can be checked off my bucket list…fishing the Great Barrier Reef!

And the net result of the day...a few nice fish, cold beers, James face looked like a tomato and my forehead looked and felt like leather...we got fried on the GBR!
Posted by AcuDocTCM at 6:32 PM