...As Adrian Cronauer would say.
HANOI
We arrived at the Hanoi Airport on time and for the most part everything went very well. However we did pay $25 to vietnam-visa.com for the “fast track” service that was to help us get by the red tape at immigration. The representative that was to meet us showed up 35 minutes late and did nothing but make a phone call to someone doing absolutely nothing for us.


Jessica and I had already submitted our passport and were just waiting to pay the $25 fee to enter the country. To make matters worst there was a tourist group from France that refused to pay the $25 entrance fee to Vietnam. Because of this there were about 30 angry French people crowding a very small counter area pushing and shoving and being...well French. This made it very hard for those of us that actual read the entry requirements for Vietnam and just wanted to pay our $25 and get on our way. After about 30-40 minutes, which would have been a 5 minute ordeal, we got our visas stamped and headed to customs which took another 5 minutes.
As expected our driver from the Hanoi Holiday Diamond was there waiting for us and we were in the car and headed for Hanoi which was about 45 minutes away from the airport.
Upon arriving at the “Diamond” before we could even get out of our car the entire staff was in the street greeting us and taking our bags into the lobby. I’m going to keep this short but you could not and I have not ever found a more personable, kind, friendly, helpful staff in any hotel in the world. They were there 24 hours a day to make sure you had no wants what-so-ever. 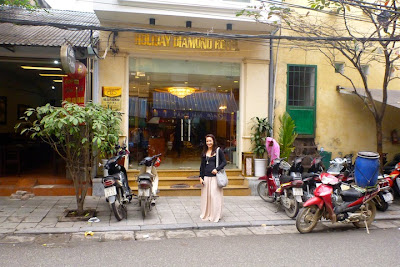 We arrive at the Hanoi Holdiay Diamond Hotel
My room was exceptional clean and had a comfortable bed, huge shower, flat screen tv, refrigerator, fresh fruit and water daily and a computer for my use a long with wifi for my own computer. There was also a great buffet style breakfast included in the price of your room, which was $30 per night. 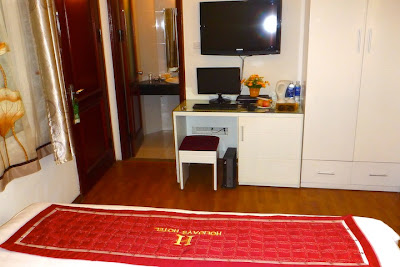 After checking in Jessica, my travel partner, and I went for a walk through the crowded streets of Hanoi. 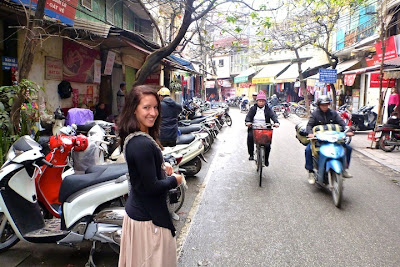 Jessica and I begin our Hanoi adventure
It was amazing to see all the people especially the scooters that were everywhere going in every direction. We dubbed it "organized chaos." Traffic just flowed in every direction and to cross the street you did the same. We called it the “zombie walk”. You just looked straight ahead and started walking regardless if it is a red light or not and they dodged you. The same went for the other scooters and the occasional car. They just kept moving and getting out of each others way.

We also noticed that many people both on scooter and walking throughtout the city wore masks covering their nose and mouth, hats and also longsleeves and gloves. This happened even in the southern cities where it was very hot. We were told it was not only for the soot and smog but to keep them protected from the sun. 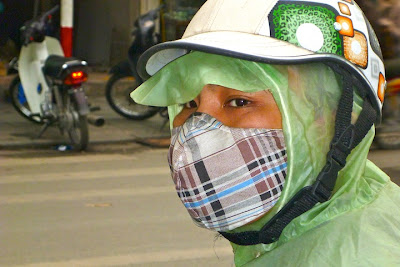 We walked throughout most of the afternoon and into the evening hours and found a beautiful lake called Hoan Kiem Lake (Lake of the Restored Sword) to visit that has the Thap Rua (Tortoise Tower) in the middle of it only about 15 minutes from the hotel. It is named so because of a 15th century legend stating that heaven sent Emperor Le Thai To a magical sword to drive the Chinese out of Vietnam. One day after the war a giant golden tortoise surfaced grabbing the sword disappearing in the depths and returned sword to it's devine owners. 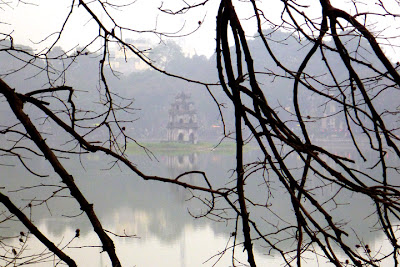 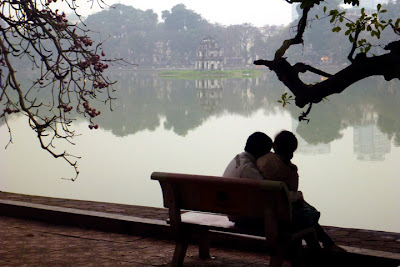 As we walked around we also noticed how the people seem to be drawn to the lake. We visited it many times and it was always the same. People were doing tai chi, exeercising, resting on park benchs, enjoying the lake and each other. 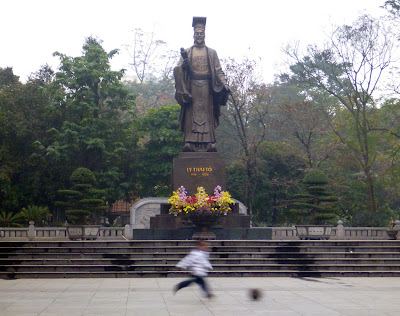 I also noticed across the street from the lake a young child chasing a ball in front of a statue of Emperor Le Thai To and took one of my favorite pictures. A Gesture of World Peace at Hoan Kiem Lake 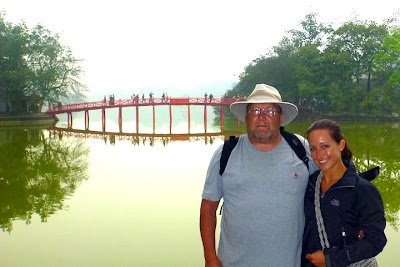 Jesssica and myself at Hoan Kiem Lake
The bridge leads to the Ngoc Son Temple on the lake
Near the top of the lake is a building we dubbed "Backdeck" as it reminded us of the back of the Rhapsody where the "Backdeck" Crew Bar is located. It is five stories, each with a restaurant/bar with an outside deck to sit and drink your favorite beer...just like on the ship. 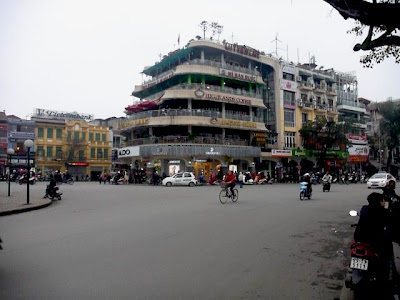 In the same location each night are the hawkers and vendors all dodging traffic and trying to sell everything under the sun to whomever will buy. This led me to get a couple of my favorite photographs. 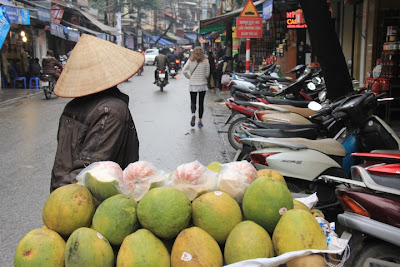 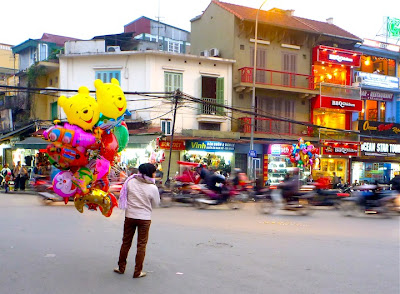 The Hanoi Balloon Lady
The next day Jess and I went exploring again. This time we went to the shopping streets where each street has a speciality. There is the locksmith street that is block after block of locksmiths, the tin box street, the toy street all doing the same thing. We were told this is because there are no telephone books in Vietnam. So all the same type of stores are in the same location. This way when you need somethng you know where to go. We also went to the silk street where Jess bought a dress and a pair of linen pants that were made for her for $30 a piece. It took just one day to do. 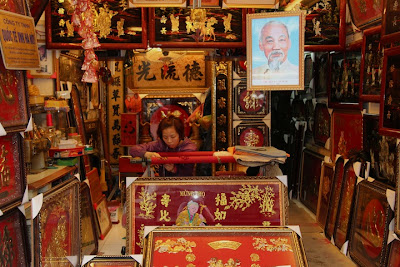 Hanoi Silk Worker
After shopping we went to St. Josephs Cathedral which was very old and very gothic. After a few pictures we decided it was time for lunch and we found a place called Pho 24 that we noticed had a few people in it eating. Pho is a type of noodle soup dish and we both had Pho Ga, which has chicken added to it. It was a very large bowl and it cost around $2.50. In fact all or our meals with something to drink and more food then you can imagine ran right around $5 each. 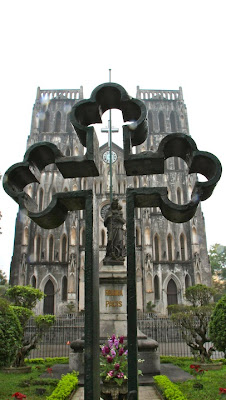 St. Joseph's Cathedral
After lunch we made our way to the infamous “Hanoi Hilton” where the American prisoners of war were held. The vast majority of the prison, now a museum, was about how badly the French had treated the Vietnamese during their occupation. There was also a couple rooms that focused on the American Vietnam War. They even had McCains flight suit, parachute and some personal items along with a few others on display. Being a Vietnam Era Vet it was very sobering walking around the prison.

The following day I walked around the backpacker again snapping away while Jess was taking a cooking class. This was a great way to spend my morning as two more of our friends from the ship were arriving that afternoon.


At one point I came across the White Horse Temple and there was a ceremony going on inside. There was a woman being dressed in ceremonial clothes by two men and music played and about six women dancers performed behind her.


Once dressed she started to dance as well and other “helpers” handed out candy and 20,000vdn which is about $1US to the crowd. I later learned that she represented and spoke for the dead relatives and blessing those that were there.


Once David and Maureen arrived at the hotel and got settled Jess and I gave them the tour of the backpacker area which we were becoming very familiar. We headed down to the lake and after dinner that night went to the Water Puppet Show. This was a very ancient play performed, yes by puppets in water which was inside of a theater.


The next morning the four of us took a taxi to the Ho Chi Mihn Mausoleum which unfortunately was closed. We still were able to walk around the ground which were huge and the area is very different to the backpacker area. It is a very clean and upscale area.


Right in front of the entrance there was a very large parade ground and Jessica it reminded her of Red Square in Russia. Our timing was great as while we were there we saw the changing of the guard.


There was also a temple on the ground that we visited. From there we walked a fair distance to the West Lake area, also very upscale and where many of the embassies are located.


Next it was time for lunch and we found another Pho 24. This one was located right next to the Temple of Literature which was our next stop. It is literally around 1,000 years old and surround by high brick wall. It contains both the shrine to Confucius named Van Mieu built in 1070, and the university for mandarins called Quoc Tu Giam, literally the "Temple of the King Who Distinguished Literature" built in 1076.


We then took the long walk back through more small streets filled with people, shops and yes scooter and even more scooters. After a snack break at the lake we headed back to the hotel to shower before heading out to a spa for a massage.


It was a beautiful spa with a wide variety of services being offered. I opted for a 90 minute aromatherapy session and a 30 minute facial that were absolutely great. Even though it is thought of as a bit pricey it still ran only $36. After a late night dinner it was back to the hotel to pack as the next morning we were off to Cat Ba Island.


We got up and took a taxi to the bus station and bought our transportation to the island. It consisted of a bus, to another bus to a boat to another bus for the 4 hour trip. As scary as that sounds it was virtually seamless and very easy. Except when David noticed he left his passport at the hotel. The Hanoi Holiday Daimond kept shining and sent a drive to the bus station with David's passport. Next stop Cat Ba Island...
Posted by AcuDocTCM at 2:53 AM