AND CONTINUES IN SINGAPORE...

SINGAPORE…
After an uneventful process of immigration and passport checks I did some shopping at the airport before my flight. The flight itself was also uneventful and I wrote my blog posting on Bali.
Upon my arrival in Singapore it was a 20-minute taxi ride to the Mitraa Hostel where I was staying with my travel partner Jessica. This was my first hostel experience. We had booked here primarily as it was the only hostel that I found that offered two to a room. That and it received good ratings on Tripadvisor.com.
When I arrived Jessica was already out and I was given instructions where she was waiting to meet me. It was a 5 minute walk to the Singapore Subway. I had to make three changes to get to Marina Bay where Jessica was waiting at the top of the Skypark Sands Hotel. 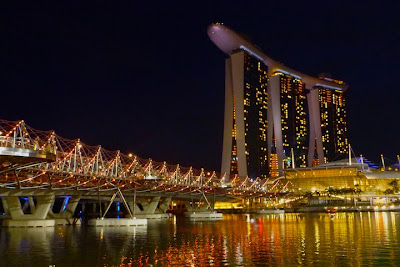 Marina Bay Sands Hotel and "DNA"  Bridge
I was told that it was a $20 charge to go to the top of the 57 story hotel but was able to get a free pass with a little finesse but talking to one of the concierges.
After a ride on the express elevator and out on the outdoor deck I was amazed at the beautiful views in every direction. Within a couple minutes I spotted Jessica and another friend of hers from the ship, Caroline. One of the most amazing aspects of the hotel is their infinity pool also on the very top of the hotel. We were not able to go to go there as it is for guests only but it was close enough to take pictures and understand what the view from the pool must be like. 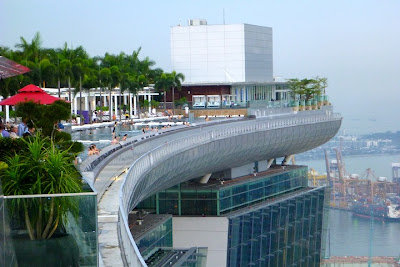 Infinity pool on top of the Marina Bay Sands Hotel
After taking pictures of the cityscape we left the hotel to get something to eat. Nearby there is a lagoon lined with buildings, amazing bridges one of which represents a strand of DNA, one of the world’s largest Ferris wheels and a football playing field and stadium. 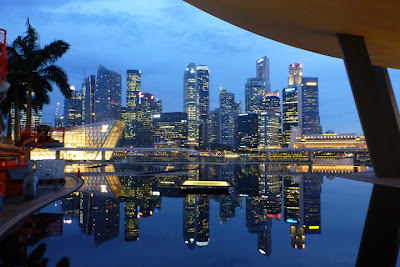 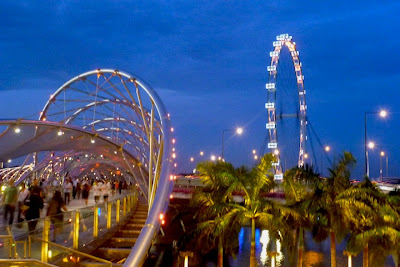 DNA Bridge at Marina Bay
Also in this area is an outside food court that was packed with people ordering from one of the half dozen food carts. It was mayhem with people pushing to get their food and food being sent out of the carts cooking area at break neck speed. I had crab rolls and seafood fried rice costing $13 and Jessica had chicken wings and a noodle plate with a fried egg on top for around $5.
After dinner we said our goodbyes to Caroline and made our way back to the hostel by subway at the cost of $2.40 one way. Once there it was time to shower, double check we had all of our paperwork together for the next day’s flight to Vietnam and to catch up on emails.
GOODBYE SINGAPORE
Having left the hostel we headed to the airport by taxi costing $25sgn including the surcharge for rush hour. Getting through the airport was a breeze including immigration, customs and ticketing.
Flying Jetstar Airlines the checking process was very quick but once onboard the seats are very close row to row and a bit cramped. If you are just sitting or reading it is not too bad but to type on a laptop it would be close to impossible. The only reason I am able to do this is there is nobody sitting in either seat in my row and I am using the tray table from the middle seat.
On the subject of Jetstar they have the WORST possible customer service. No matter what method you choose you can never get in touch with them. And at the airport all they will tell you is you must contact customer service for a refund.
When my vacation plans changed from Cambodia to the Philippines I had already bought my ticket from Siem Reap back to Singapore to catch the ship. It is absolutely impossible to contact customer service. For two months I have written 6-7 emails to no avail. I have tried to call when on land and you are on hold forever. They tell you to Skype on their website but that doesn’t work either.
So my advice is if you know for sure that your plans will not change fly Jetstar if you want. But for me I will NEVER give them one more penny. Thankfully the flight I wanted to cancel was only around $100 but still it is the principle involved.
I have however gotten three emails advising me that my flight times have been changed asking me to accept and confirm or contact customer service if this is unacceptable….good luck with that…
Posted by AcuDocTCM at 12:51 AM