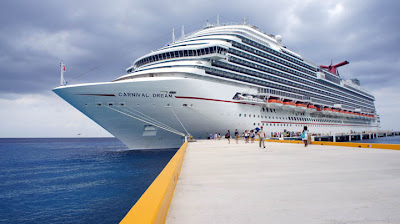 Docked in Cozumel
PLAY HARD
If it’s Monday it must be Cozumel at least from 10am to 6pm. Most of you that are friends know that I have spent years in and out of Mexico. It has been Baja for over 20 years and a couple in and out of San Carlos on the mainland.
I have never been to Cozumel. I found it very much like most tourist resorts in Mexico. I am also well versed enough to know the first thing to do is get away from “touristville”. So I caught a taxi and headed to el centro, downtown, where I wanted to see a little of the town, go to the super mercado and buy a few things. I was able to have a conversation with the taxi driver in Spanish and found where to go and get what I was looking for in town. 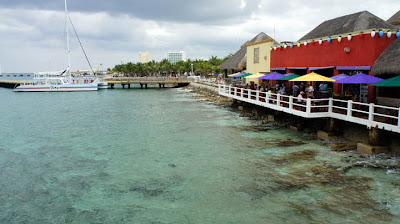 Touristville at the base of the pier
As I did not have the full day off it was not a good idea to go out and party. I basically walked around town where I found it still be very much geared to the tourist industry and found myself saying “no gracias” as I passed every shop.
I did stop and look at some of the local menus and drink prices and found them very high to what I was used to in La Paz, El Rosario, La Ventana and San Carlos but probably very much in line with Cabo. I was surprised to see no street vendors and I was looking forward to a couple fish tacos or carnitas.
Overall I was not overly impressed with Cozumel but to be fair not having a full day off and it being my first time here I was unable to really get to la playa and the outskirts or to the ruins which I’m sure would be great. Next time.
I did however stop and talk to one of the small local tequila shop owners a few blocks off the main street. He told me about the tequila tour that there is a few miles away. It involves a showing of how tequila is made and a tasting bar where you can drink shots “all day” as he put it and learn about the differences between blancos, resposados and anejos. I would definitely like to do this some day as tequila now days is my drug of choice. Oh yeah the cost of the tour is $14us.
Tuesday - Day Four…Port Day
WORK HARD
Today started again at 8am as it is a port day. I am finding that my client load is well underway. I saw two new patients today and with my six returning patients I had another busy day.
I am finding that now that I have found my comfort zone having two treatments rooms I am only having one problem…paperwork. This is one area I believe that should be covered at the three day training seminar so you have a better understanding what is required of you as far as paperwork.
I am used to a receptionist scheduling my appointments, collecting payments and closing the books on my daily totals. I am slowing getting this together as there is a lot to learn and a lot of different reports to file. It seems as soon as I get one thing down there seems to be something new to learn. Again the “girls” that make up the spa staff have been wonderful and extremely understanding. They are there at every turn whenever I have a question or to show me what to do, sometimes more then once.
I had another split schedule today which allowed me to go to shore for a few hours to take photographs. I am looking forward to having a full day off while in port to explore an area further at some point. For now I enjoy being able to have a break and visit ports of call, even briefly. So what am I doing between my morning and evening patients…Belize!
PLAY HARD 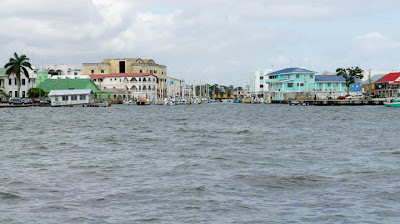 On the Water Taxi – Belize City 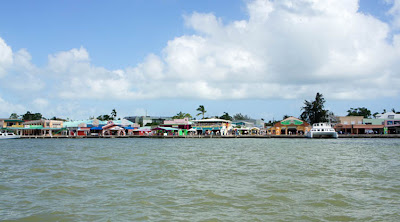 Belize City Waterfront
I spent about two hours exploring the port city of Belize City by wondering back streets and getting away from touristville. In my former life as a photojournalist I used to love to do this even in the states. I mentioned this to one of my patients that I walked around Cozumel with a little yesterday and he asked me “didn’t they tell you not to go out of the “tourist zone”? I said no and that it wouldn’t stop me anyway. Maybe that is foolish but after spending so much time in Mexico and in the Orient it is something I am comfortable doing. And just like anywhere else pay attention to what is going on around you. 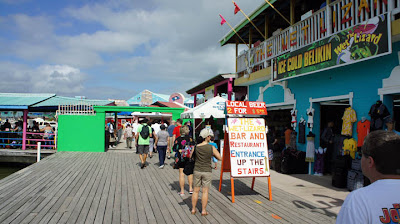 The Wet Lizard Bar in “Touristville”
I did look at some of the local prices just to see how they compared to Cozumel. Everything seemed to be a little less expensive here. T-shirts were as little as 3 for $15, polo shirts ran $15 and one thing that was a nice surprise the local beer is 2 for $5 verses up to $4 a beer in Mexico. 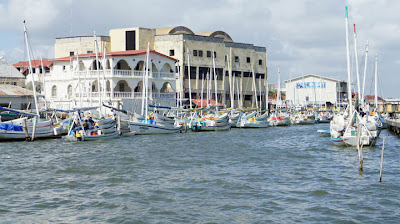 Entrance to the River 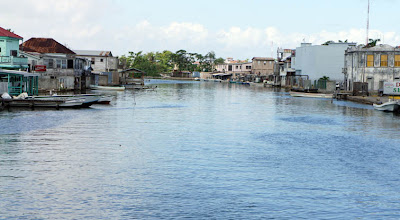 Further Back on the River
It was different out with the locals. A few blocks from the “tourist zone” I was approached and asked if I wanted anything from marijuana to girls. I just kept saying no, laughing at times, and continued my exploration. This is where I found Bada-Bings Pizza and the Food Cafe. I then headed back to the ship to relax before my evening clients. 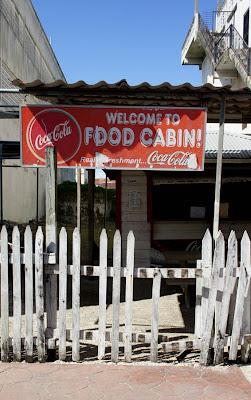 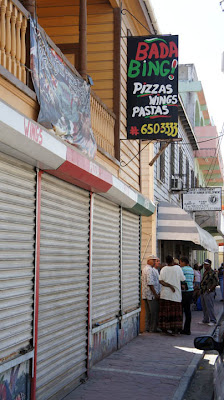 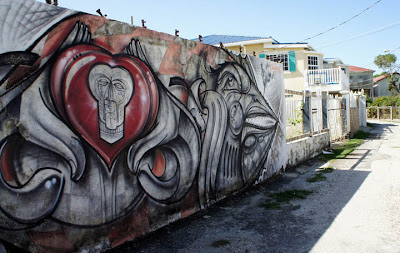 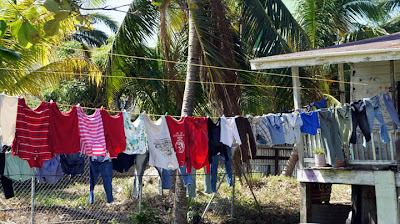 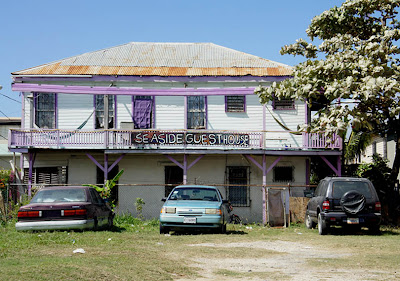 Waterfront "Seaside Guest House"
Being a shallow water harbor I’ve been told today that Belize may not be on the cruise schedule in the near future as guests are complaining about not being moored to a pier. The ship is anchored a few miles offshore and about a 20 minute ride one way which means a minimum hour out of your day and possibly even longer if you have to wait for the boat to fill. This happened to one of my patients today and she had to reschedule her appointment. 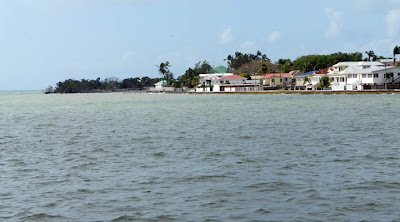 A Little Out of Town

Wednesday - Day Five…Port Day
WORK HARD
Today is another split schedule and after my morning patients I’m going ashore for a little bit to Isla Roatan. I do have a couple more patients, one returning and one new, this afternoon.
PLAY HARD
I stepped outside this morning in order to take in the view, which is part of my morning routine. The minute I did there was a sigh of relief as we were approaching Roatan and the view was amazing. It is a lush, green tropical island with beautiful white beaches that is begging to be explored and photographed. Roatan is what I’ve been waiting for…paradise!

Just Above Touristville
The spa is located on Decks 12 and Deck 14. Both of my treatment rooms are just steps away from a door that opens onto a veranda area called Serenity, which is an adults only, no kids allowed area of the ship. It is always quiet, has very few guests and the view is amazing from this height.
I only spent an hour walking around Roatan as I have another patient in the early afternoon and couldn’t stray too far from the ship. I also wanted to take my time and take some pictures of the island from the vantage point onboard. As in every port I can’t wait until I have more time off in order to be able to explore the island.
Various Views from the Dream in Port 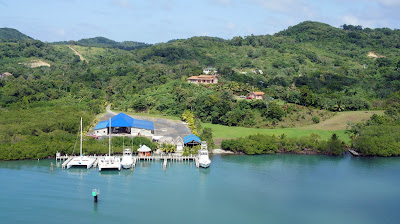 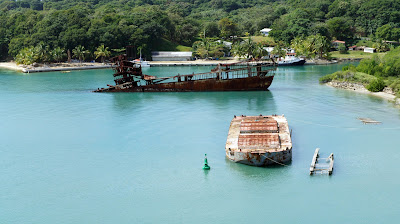 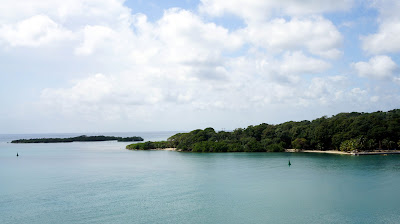 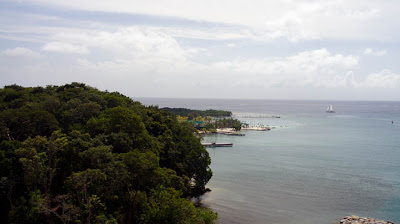 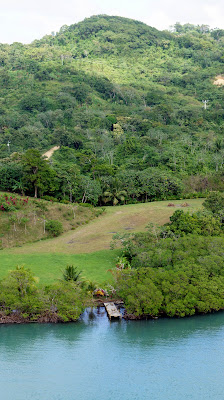 Again I hope everyone is enjoying the blog and for you acupuncturists it is giving you some insight. Looking forward to your comments.
Posted by AcuDocTCM at 7:16 PM