FIRST AND FOREMOST
The one thing I highly suggest if you are headed to these buy whatever you are going to need for the long haul before you leave the states. EVERYTHING is VERY expensive, most of the times twice if not three times more money here then in the states. For protein powder that I buy in the states it is around $20, here it is closer to $70-$80. And from what I understand Australia is going to be the same.
RUGBY WORLD CUP…NEW ZEALAND!!!

ticket to my first rugby game
and the World Cup Quarter Fianls to boot...
Once again I am trying to catch up on my blog. That could be a good thing as it generally means I’ve been busy.
Today is October 20th on this side of the International Dateline and still the 19th at home in the states. I am sitting in my office waiting for “liberty call” in order to go ashore.
We arrived in Auckland on October 6th and are here for the Rugby World Cup finals. The ship is a charter cruise and following the rugby tournaments. We have been bouncing from Auckland to Wellington and back to Auckland with a few ports of call in-between. 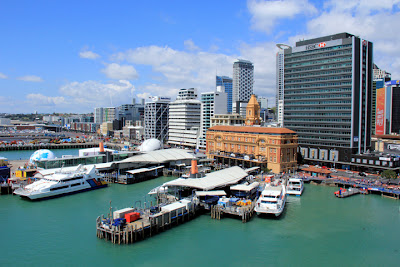 downtown Auckland from the ship 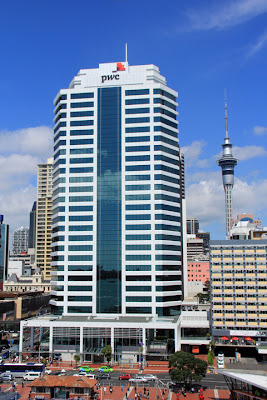 another shot from the ship
Other then the cities where rugby is being played we have been in Picton, Bay of Islands, Napier and today we are back in Tauranga.
After 5 sea days our first port of call was Auckland. We didn’t have much time there as it was embark and I only got off the ship for about an hour. Since that first visit we have spent a fair amount of time in Auckland. We spent 3 nights there for the semi-finals and next week we will be back again for two days for the finals.
I found Auckland to be a very nice place for a city. Everyone seemed very nice and friendly and the city itself was very clean. Maybe this was due to the World Cup just like in LA when the cleaned the place up for the Olympics. Maybe not as on a whole the country seems very pristine and everywhere I’ve been it is remarkable clean, even in the cities.

Here are four shots of the Sky Tower. It is the highest building in teh lower hemispere and located in Auckland. 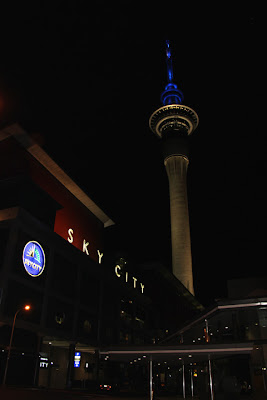 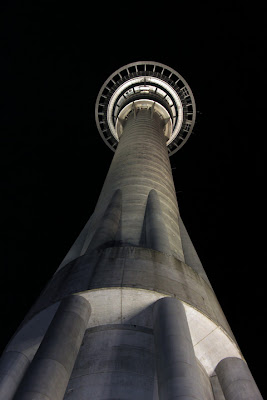 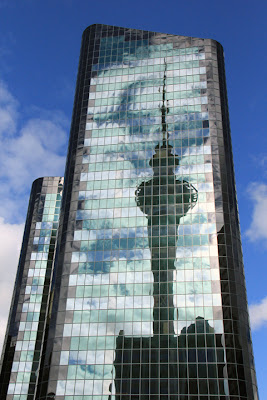 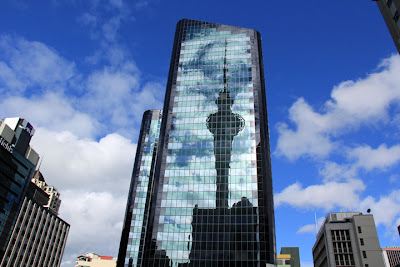 As I have said this trip has focused on the Rugby World Cup. There are many people both in the city and on the ship from the different countries involved. Most are sporting their countries colors, waving flags and generally celebrating the entire event.
The stadium in Auckland is about 5 kilometers from the ship and there is an official “fan walk”.  This route takes you through the heart of the city lined by store, cafes and bars along the way. At on intersection a group of dancers waits for the light to change and traffic to stop. At that point the run into the street and do a dance for the fans and as soon as the light changes race back to the sidewalk again. This went on for hours each day of the tournament.
The night of the New Zealand All Blacks verses the Australians Wallabies the town went crazy. These two are archrivals and both played a great game. Afterwards I walked a mile back to the ship. The All Blacks won the game and for the entire mile the streets were backs and everyone was chanting “All Blacks…All Blacks…All Blacks” nonstop.
Now that I have skipped a head let me back track a bit. I went to my first rugby match in Wellington. We were there for a couple nights also and the city again was amped for the games.
I also found Wellington to be a great place. The first night in port was Ireland verses Wales. It was a bit much as my two closest friends on the ship are both huge rugby fans and one is from Ireland the other from Wales. James team, Wales won the match and after the game we met up at the “Fan Zone” in downtown Wellington. 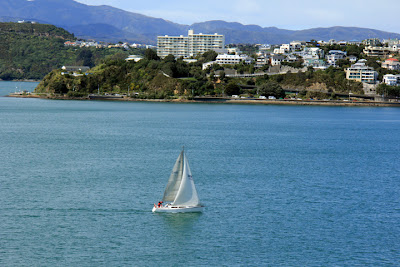 Wellington from the ship 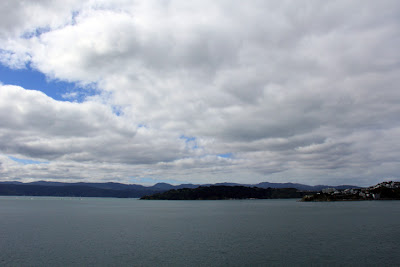 the bay at Wellington from the ship 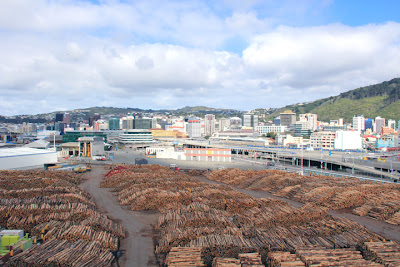 looking toward downtown Wellington from the ship
The city closed down an area of 6-7 blocks, added a few big screens on the streets and the bars were filled to the brim. There were hundreds of people filling the streets if not more. It was a huge party zone that lasted well into the early hours of the morning.
The next night it was South Africa verses Australia. Here the ship was moored directly across the street from the stadium. I’ve heard from a number of friends that they actually saw the ship during the televised event. 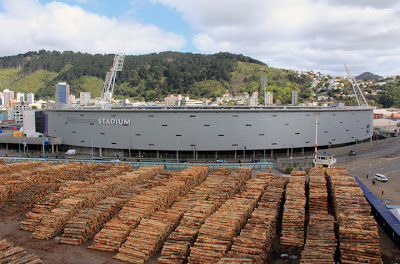 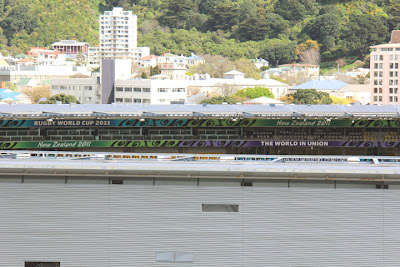 The Wellington Stadium from the ship
It was my first time at a rugby game and I was backing South Africa as many of the crew and spa staff that I went with was from there. Unfortunately South Africa lost but it was a very good game. I really enjoyed the match and had a fairly good understanding of the rules as James watched a couple games on the ship with me explaining the rules. 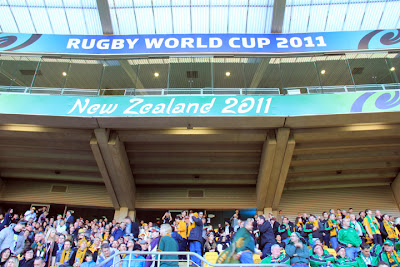 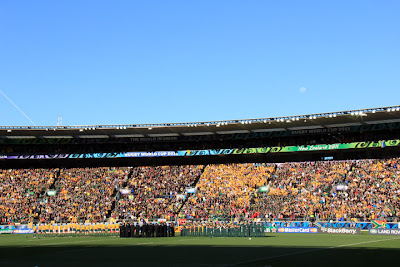 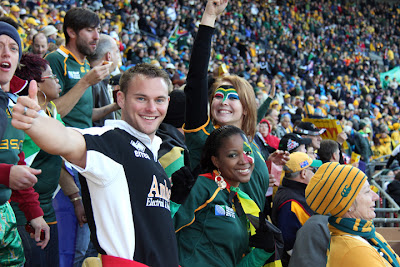 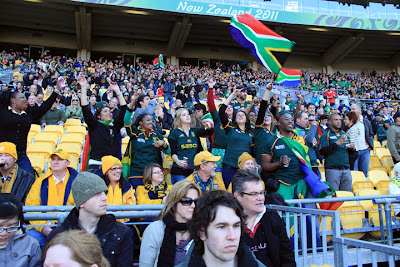 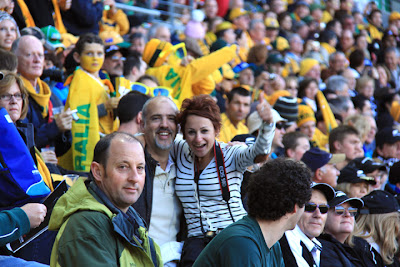 Dan and Alex
I still maintain though rugby is a very hard hitting game that American football is harder hitting mostly because you are allowed to do so. There is no blocking etc. in rugby. James would tell me that football was just a bunch of guys wearing pads, which they don’t do in rugby. I’d come back and say that they don’t wear pads in rugby because you don’t hit hard enough to need them… 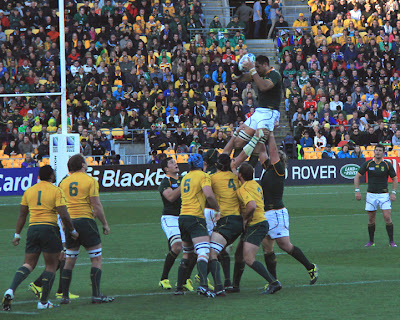 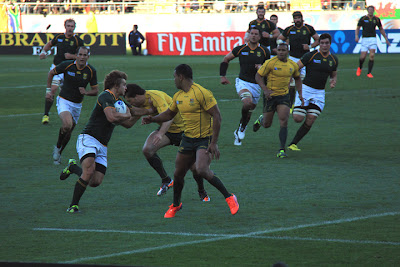 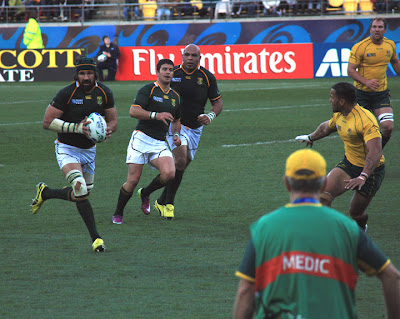 This week we will again go to Auckland for the finals. It will be New Zealand verses France. I’m sure once again the town will go crazy, probably even more so as it is the final.
As a side not there is a building in Auckland called the Sky Tower. It is the highest building in the southern hemisphere and looks very much like the Space Needle in Seattle. It was walking distance from the ship and one of its claims to fame is the bungee jump from near the top. The cost $250…no thanks…
NOW FOR THE REST OF NEW ZEALAND…
NAPIER
One of our ports of calls has been Napier. This is also a city but much smaller then Wellington or Auckland. Napier has a beautiful waterfront lined with a small park as well as a very long beach. There are a couple main streets that go a handful of blocks back from the beach lined with shops, restaurants and café.
We’ve been to Napier twice on this cruise. The first time it was raining and I left the ship with Amelia. We went to lunch and then to a couple bars looking for a few of the others to no avail. We ended up having a beer and shooting pool at a local pub called “The Rose”. 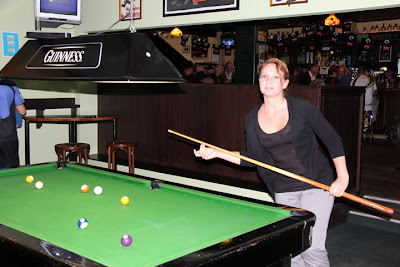 Shooting pool with Amelia at "The Rose" 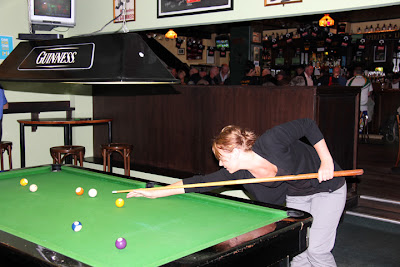 Amelia is one of my travel partners to
Cambodia and Vietnam in March
Yesterday was our next and last visit to Napier. I only had a couple hours off and I went back into town to take some pictures that I was not able to get last time due to the rain. The sun was out and the weather was warm.
After getting the shots I wanted I traveled down one the streets in hopes of finding a rugby world cup shirt at a fair price. Most everything in New Zealand is much higher priced then in the states. And because of the World Cup anything to do with the games in also very expensive. I have not bought a shirt yet because they are priced around $100 for official shirts and I refuse to pay that much. Today was my lucky day. I defiantly wanted a shirt having been here and actually having gone to a game. I found a store with official rugby items on sale and got the shirt I wanted to $40 New Zealand that is $33 American. Still pricey but at least I can justify that amount, after all it is a once in a lifetime opportunity and experience for me.
PICTON
Picton is one of my favorite ports in New Zealand. Picton is a very small town with a beautiful waterfront. On our first visit there was an arts and crafts show in the park located on the water. There are many shops that offer tours to different areas of the many bays that surround Picton.
Yesterday I met up with Jessica that is one of the dancers from the ship. Jessica is one the two girls that I’m traveling with to Cambodia and Vietnam in March while the ship is in dry dock in Singapore.
We decided to go for a short hike to the top of one of the hills. The views were really nice of the bay and of the town below. Afterwards it was back to town for a bite to eat before heading back to the ship. 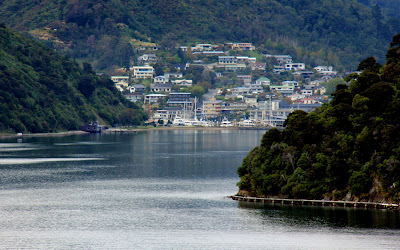 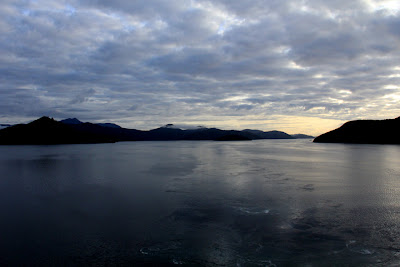 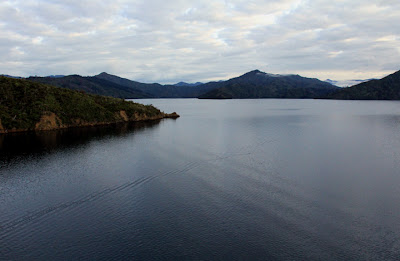 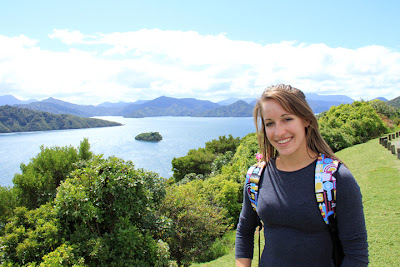 Jessica above Picton on a hike together
Four months to go and we are headed to Cambodia and Vietnam
BAY OF ISLANDS...PIAHIA
Bay of Islands is another favorite of mine. It is a small area filled with, yes islands. It is also where the Maori culture hails at its birthplace. We will be there tomorrow for an overnighter and I plan on going to the Maori Cultural Center for its show that night. The next day I want to go and explore the area a bit and go for a hike.
Last week there was an arts and crafts show and farmers market. The town itself is small in size but there seems to be a lot of nature in the area if you choose to explore a bit. There are many shops that offer everything from diving, fishing and boat rides to helicopter rides. 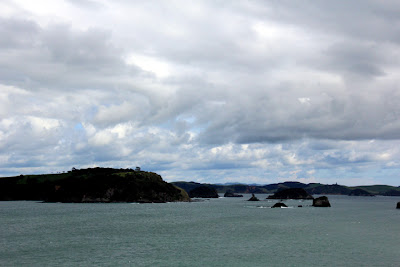 Entering the Bay of Islands region 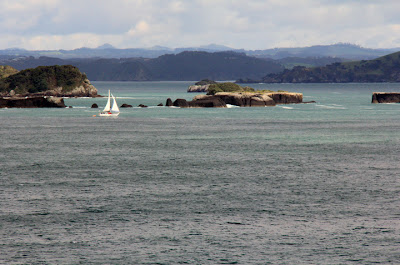 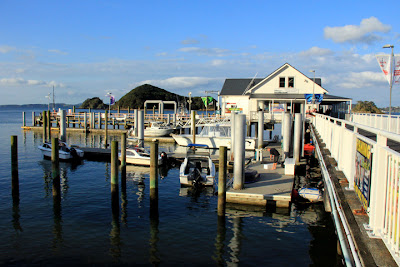 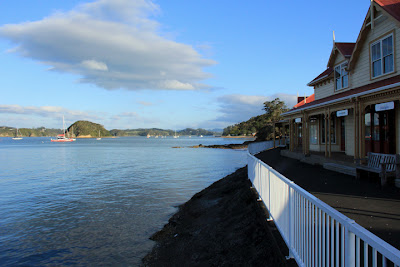 TAURANGA
Today we are back in Tauranga. It is also a small town with a main street filled with shops and restaurants. By walking a few blocks through town you come to a great beach that stretches for miles.
The downfall to being on ships is most of the time you don’t have days on end to explore the true beauty and nature of these areas. Most what we see is the town and maybe a bit of the area. Still all in all it is a great life and I feel very fortunate to be able to travel and make money to boot.
A week from today we will be in Sydney, Australia and explore new areas.
Posted by AcuDocTCM at 7:17 PM