After this cruise we head to Singapore for dry dock. After dry dock we will sail to Sydney for our last time and then head back to the States. On the way we will visit some of the same ports one last time and another new port Samoa.
I’ll be leaving the ship early in Bali for vacation. After 4 days in Bali I fly to Singapore for one night then catch a plane to Vietnam. I’ll be spending 2.5 weeks in Vietnam visiting Hanoi, Cat Ba Island, Nha Trang, Ho Chi Ming City and Ben Tre in the Mekong Delta. After that I will fly to the Philippines for 10 days to visit one of my closest friends, Dean Sberna and his family that will be on vacation there from the states. After the Philippines I will again join the Rhapsody for another contract of 4-5 months.
Now on to exploring Vila. Today instead of going straight to the “Vila Hideout” that James and I did every time we were in port I decided it was time to explore a bit of Vila.
So some of the spa girls, Jamie, Charlotte, Caroline, Hailey and I hired a driver to take us around the island. We got a new air-conditioned van with David as a driver and were off for a 5-hour trek for $140.
Our first stop was the “Blue Lagoon”. This is a natural freshwater spring that is located very near the ocean about 30 minutes from the ship. In fact the freshwater mixes with the saltwater of the ocean and creates an unusual blue color. We didn’t really notice it much as it was an overcast day in the morning. However the water was very clear, just a touch cool and very inviting. 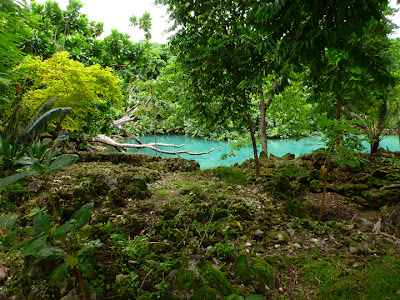 Blue Lagoon - Vila, Vanuatu
The “lagoon” is fairly large and even has a rope swing which all of us enjoyed. We even noticed a couple small fish along with a sea snake. What was also very nice is there were very few people there. On and off maybe 4-5 people would show up and then leave only after a few minutes. We stayed maybe for 45 minutes and took our time. Upon leaving there is a 300 vatu charge, about $3. 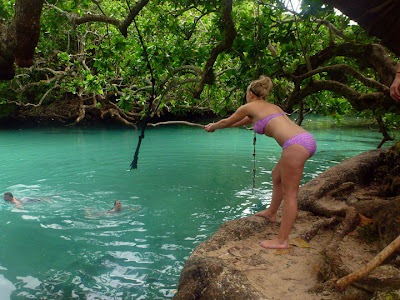 Charolette on the swing and Jamie and I in the drink 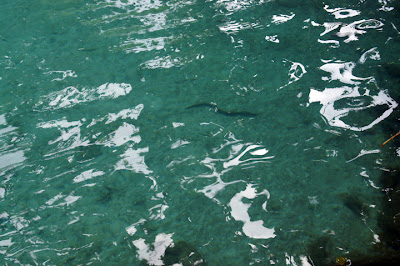 Sea Snake
Our next stop was the Vila Waterfall. It was the opposite direction then the Blue Lagoon location so we had to backtrack 35km to Vila and then it was another 20 minutes further to the trailhead for the falls. Here there is a 1500 vatu or $20 charge.
Off we went up the trail for about 20 minutes. Parts of the trail are very steep with steps cut into stone. Other parts are flat and still others you cross the small stream several times. At first glance the fall look “okay” until you get a bit higher. They are maybe 200 - 300 feet high, maybe a bit more and empty into a pool that you can sit in having the water rush behind you or onto your head. You can even get behind a small section of the falls and be in one of nature’s showers. 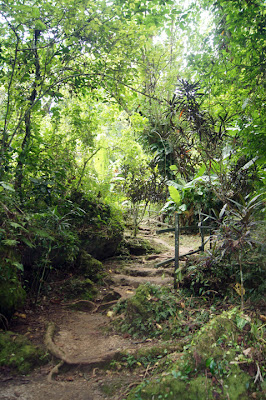 Trail to the Vila Falls 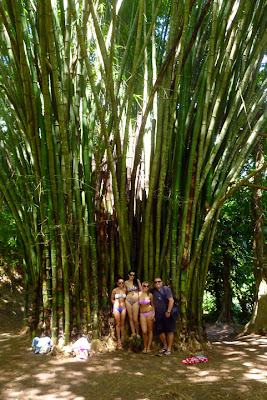 Bamboo Tree on the Falls Trail 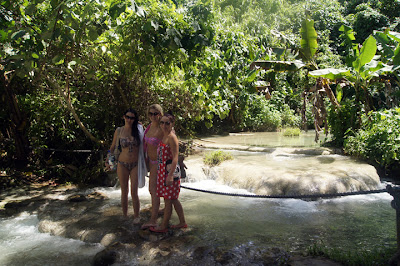 Hailey, Jamie and Charolette at a stream crossing
We all enjoyed the falls but as you would guess there were a lot of people there. Obviously it would have been nice to have it all to ourselves but that seemed impossible. So after about 30 minutes at the falls we headed back down the trail to the van to go back into town for lunch. 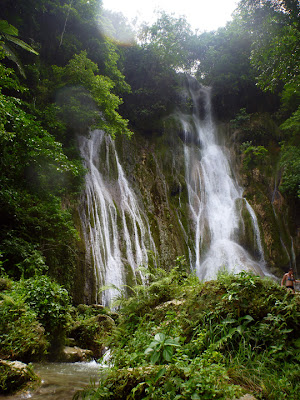 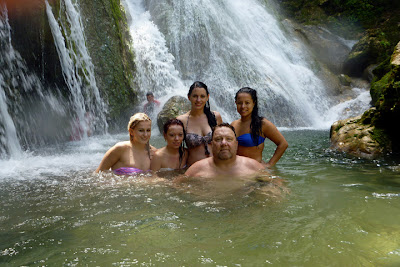 Group shot at the falls 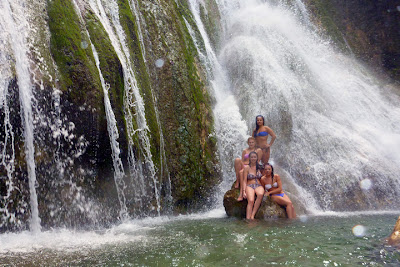 The Girls at the base of the Falls 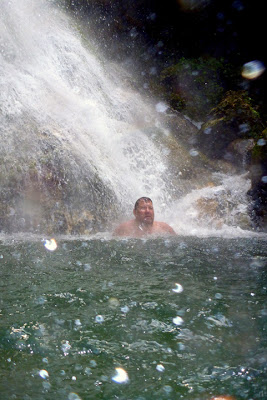 Self Indulgence
Next stop The Hideout. As mentioned in my last post Caroline has been there but it was new to the other girls. Of course they all wanted to know why I had not told them of the place before and this too was explained in previous posts. 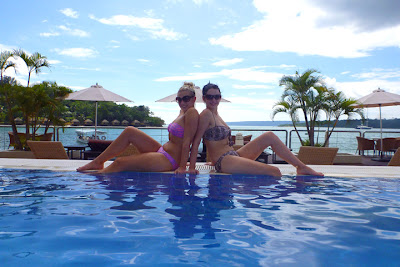 Charolette and Jamie at "The Hideout"
So the five of us ate lunch, drank strawberry daiquiris and swam in the pool for about an hour before heading back to the ship. Vila was one of my favorite places on this cruise/contract. However I will have one last visit here on the crossing back to the States in April.
Posted by AcuDocTCM at 4:25 PM