PLAY HARD
Well it has been some time since my last post and it is time to catch up. First let me wish everyone a happy new year and thank those of you that are following my blog for your support.
We have been seeing the same ports over and over like a lot of us do working on ships. I will say that for towns Cairns, Australia and Noumea, New Caledonia have been my favorites with Cairns topping the list. Although I found a great place in Noumea called Rimba Juice for chicken quesadillas right across the street from the beach and I eat there every time we are in port. The down side is that being a French island everything is very expensive. For a great quesadilla and a couple beers it is $30US. 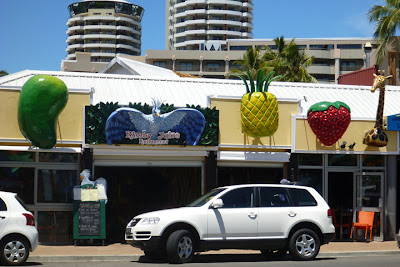 Rimba Juice in Noumea, New Caledonia
I’d also have to add Vila, Vanuatu as favorites as well. James and I found a great place to hang out and hide from the rest of the crew on the ship. Neither of us has told anyone because if a lot of crew show up the owners of this hideaway will not let us use the pool etc. as their “paying” guest might get upset. It is located right on the water, has an infinity pool, great food with a $10 lunch special and beers are $3 a piece. So the name of the “hideout” place is the Casino Hotel Just keep it for yourself or chance not being able to go there at all. 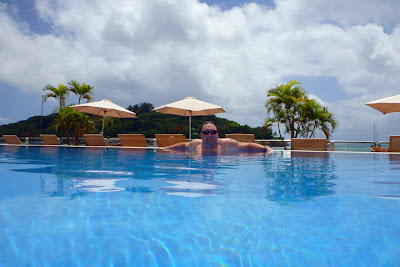 Hangin' at the "Hideout" in Vila 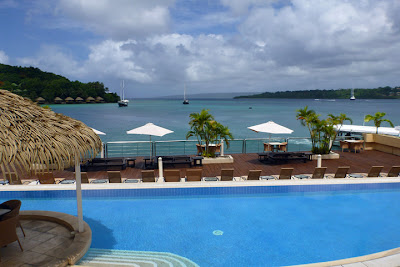 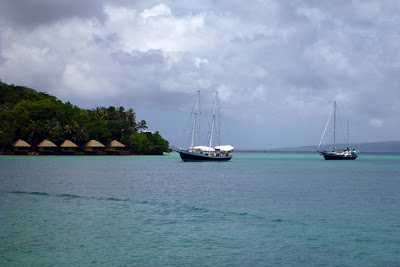 From the Hideout
In fact the last time we were in Vila we took someone with us, Caroline. It was hilarious as James and I prodded her saying “I wonder what this place is” as we drove by. We had the taxi driver stop and we read the sign outside “$10 lunch” and we said let give it a try. So we walked in like we had never bee there before and walked straight out to the pool. We sat where we have sat a half dozen times before underneath a veranda right next to the pool. Caroline said, “let go in the pool.” So of course James and I replied, “maybe we should see if it is okay, it might be just for hotel guests” although we have swam in it numerous times. Next James spoke out “I wonder if Samson is working today?” Samson was the usual waiter that took great care of us never letting us run out of cold beer. Eventually Caroline caught on and James and I had a great laugh. She would say, “how do you guys know the name of the waiter?” Later she stated that everyone was always asking where we disappeared to in Vila. Well now one person knows. 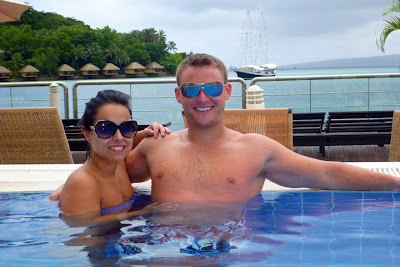 After we let Caroline in on the joke....
The next time I am in Vila I’m hiring a driver to take some of the spa girls and myself around the island. We are going to the waterfalls and the blue lagoon. I’ve heard great things about these places and will of course post the pictures I take. James has left the ship as his contract is up and he is with Irish in Brazil for Carnival.
We are also visiting many places that there is really nothing but beach. That is the case with Mystery Island, Vanuatu, Isle of Pines and Lifou in the Loyality Islands in the Coral Sea. These are great places to just relax and enjoy the beach. There is real not much to do there other then lie on the beach and of course snorkel. 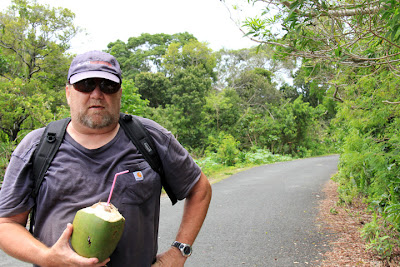 The local drink on the way to snorkeling 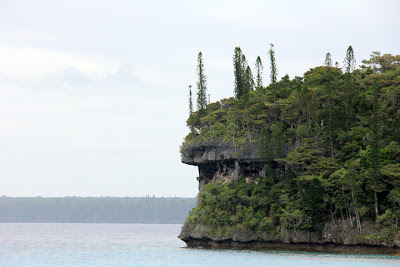 The backsidie of the island in Lifou
where you snorkel
I have been having a great time snorkeling and my favorite place is Lifou by far. The water is extremely clear and so many fish you would think you are in an aquarium. It really is amazing and so very beautiful. 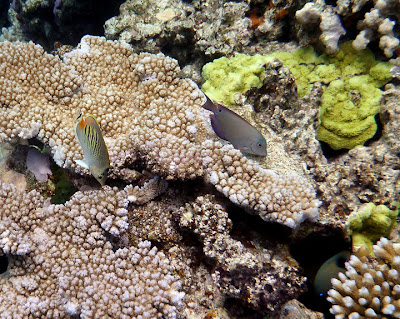 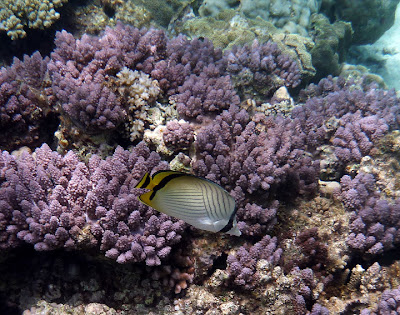 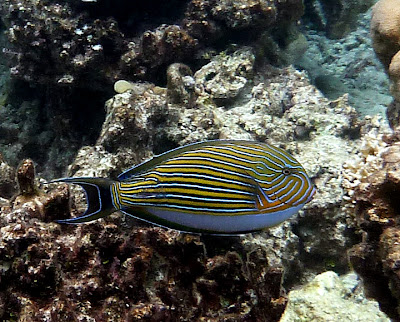 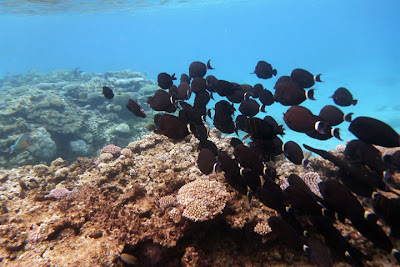 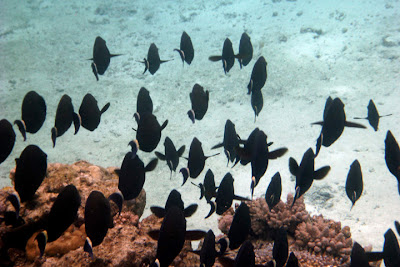 I even followed this school of tangs
for about 15 - 20 mintues
On the subject of snorkeling I would advise you to buy at least a very good mask and snorkel before you board the ship. I didn’t do this but was lucky to find a great dive shop in Cairns that was having a huge sale and I bought around $400 in top of the line gear including a great pair of fins for around $200. You don’t need to go all out like I did but do make sure that the mask fits perfectly or you will have problems and get discouraged. 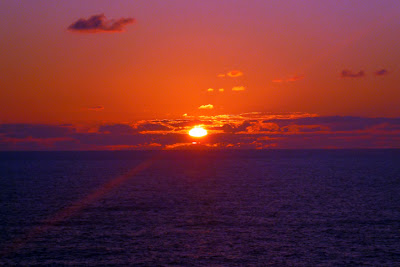 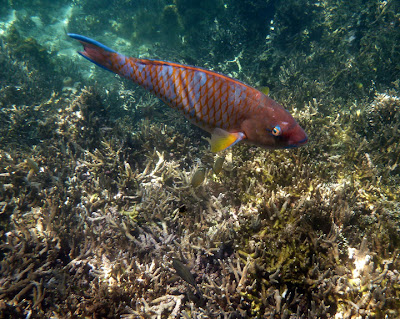 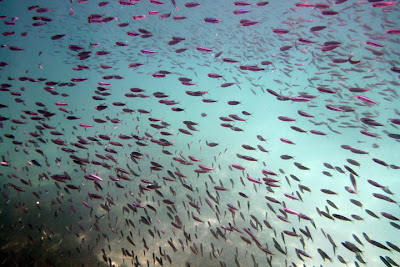 Even the Isle of Pines had good snorkeling, though nowhere near that of Lifou 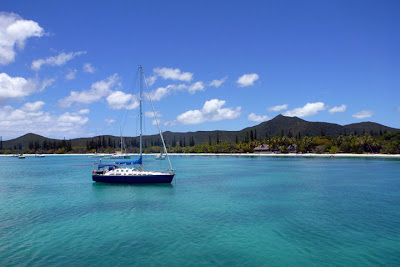 Sailboat at the Island of Pines
Once you have all your gear then it is “free” in every port you visit to go snorkeling and enjoy yourself. Even if you only have a few hours off it is well worth a trip to the beach and to relax in the water swimming with the fish. It really is one the best investments that I made.
The other is an underwater camera. Some of you know I used to be a professional photojournalist so I did a lot of research to get the best underwater camera for the money without spending a lot of cash. I also wanted something small enough to carry around with me because at times I don’t want to carry my Canon D60. Also I wanted something that I could use kayaking etc. I chose the Lumix TS3, which has a Leica lens and can be used 40 feet below the surface without a case. The picture quality speaks for itself. I found the camera at Amazon for $250 plus shipping.
So that is it for ‘play hard” and now I should spend a little time writing about a few things that I have discovered along the way as far as work goes.
WORK HARD
Well it has been a bit different then I hoped this last month. I’ve always heard that over Christmas it was extremely busy. This was not the case at least on this ship. I did stay busy but nowhere near the numbers I hoped for and/or heard of happening at this time of year.
Also we had a Greek Charter Cruise since my last post and it was absolutely horrible. Hardly anyone showed for seminars, very few booked and nobody at all rebooked. I also did not sell even one thing for retail and I am usually #1 in all of Steiner for retail. I’ve been very honest with all of you and told you some of my highs so I’ll be consistent and tell you my low, which was the Greek Cruise where I did 9 patients for around $1300 for the entire cruise. The next week, this cruise things went right back to a good week and I stated out with $1100 on the first sea day and $3200 in the second sea day. It just goes to show that some people will not come to at all and this was the case for my worst cruise ever. I ended the cruise right around $8000.
I can’t remember if I have touched on this before but it helps me a great deal for seminars. Have a box with everything you need for your presentation. I know all I have to do is gave it and go and everything I need is there. 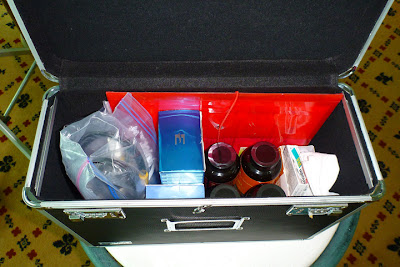 In mine I have 4 bottles of herbs included are Why Weight, Sweet Enough, Back and Knee and the Joint Remedy. I include a bottle of Super Soak and Instant Refreshing Gel. I also have a clean needle surface, Serin needles, alcohol pads, cotton balls and handouts such as the Herb Brochure. I also carry the adapter, cord and remote that I need for the projector. I bought the box I use from Staples. It looks professional and holds everything I need.
I also have a clipboard that has a pencil/pen box on the bottom and an inside compartment. I use this to sign patients up and when doing so give them an intake form to fill out and bring back to the appointment. 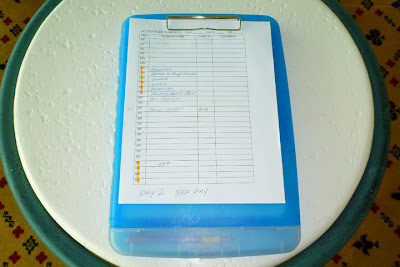 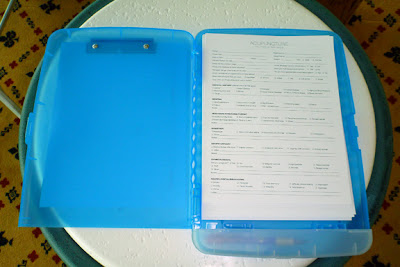 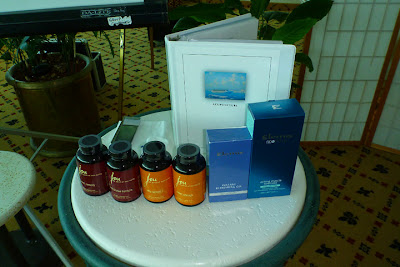 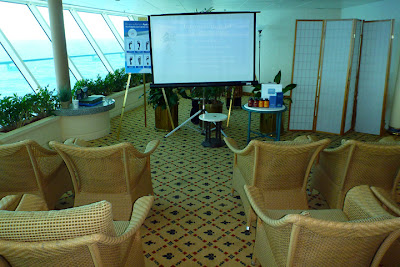 I like to sign patients up right after the seminar and not leading them out to the computer for a couple reasons. One being they may change there mind out to the desk and the other being peer pressure. If they see a number of people signing up for appointments they are more likely to do so. It is just human nature not to be left out of anything. I do see the difference in the number of people making appointments when I use this method verse when I didn’t sign patients up right in the room. I am lucky enough that I usually have a fairly high sign up rate after my seminars and I believe this is one reason. The fitness trainer also confirmed this and it is the way he signs people up as well.
So I guess that is it for now. I’ll post again after Vila taking pictures around the island.
Thanks again for all the interest and your questions. I hope you have found my answers to be helpful
-larry
VACATION IN 18 DAYS
Okay I have not had time to post the above so here is an update to my update. I am now on my second to last cruise. I am also leaving a few days earlier then expected. What does this mean? I have to spend 4 days in Bali before flying to Singapore where I was initially suppose to debark. I know poor me, 4 day in Bali…
After that I am on vacation and flying to Vietnam for 2.5 weeks. This is a bit strange as being a Vietnam Era Vet 40 years ago I was doing everything I could to stay away from Vietnam, now I am going on vacation there. Now it is also very important to me to clarify something at this point. I stated that I was a Vietnam “Era” Vet. That means I was in the service, actually the US Navy” during the time of the Vietnam War but I do not go “in country”. I would never take anything away for those that served in country, they are Vietnam Vets.
Okay now that is cleared up. I am going to Hanoi, Cat Ba Island in Halong Bay, Nha Trang, Ho Chi Mihn City (Saigon) and Ben Tre and My Tho in the Mekong Delta. After that I am joining one of my closest friends and his family in the Philippines for 10 days.
Then I will return to the Rhapsody for another contract. After the $65 million refit in dry dock we take one last cruise through Australia and then head back to Alaska. Stopping first in Samoa, French Polynesia and Hawaii on the way.
Posted by AcuDocTCM at 6:50 PM